Death: 1984, Corscombe, Dorset, Cause not known

Notes: Rosa was born in India in 1893. Her father was a Brigadier General. In 1912 she founded the first Girl Guides company in North Wales, in Denbigh. The first was in Carmarthen (1910). Although she still under 21 she was soon appointed County Commissioner for Denbighshire. Rosa Ward seems to have introduced camping to the Guides; what was probably the first camp in Wales was set up by her at Segrwyd in 1916, and by 1931 she was the Guide Commissioner for Camping. Between 1939 ad 1944 she was Chief Commissioner for Wales She died in 1984 aged 101. 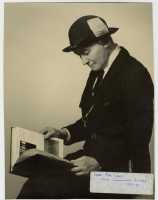 Photograph of Rosa Ward as Chief Commissioner in Wales. 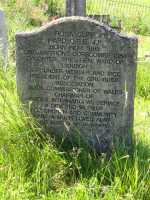 Notes: Gladys Watkins, born about 1882, joined QAIMNS in April 1909, and was sent to France very shortly after the outbreak of war. She was invalided home in September 1917, suffering from ’neurasthenia’; she seems to have had a complete mental breakdown. She spent much of the next two years in hospital, nursing homes, or staying with her sister Edith who was also a nurse. She faced numerous army medical boards, most of which declared her fit for home or sedentary service. Letters from Gladys herself, her sister and various doctors survive in her records in the National Archives. They describe her agoraphobia, suicidal tendencies and night terrors ‘associated with bursting shells’. She tendered her resignation from QAIMNS in the summer of 1918, though this was deferred and later withdrawn. By summer 1919 her health was improving: ‘I have been doing outdoor work, poultry etc, for the last three months and now feel much stronger’. She was passed fit ‘for home service’ in October 1919, and continued her career at Netley Military Hospital. The last record of her is summer 1923, when her file says ‘Warn for tour of foreign service’.Gladys was awarded the Royal Red Cross on her return from France in 1917.

Letter from Gladys’s doctor in Ross on Wye describing her condition.

Letter from Gladys’s doctor in Ross on Wye describing her condition, continued.

Part of letter from Matron in Chief, QAIMNS, suggesting Gladys should be demobilised. 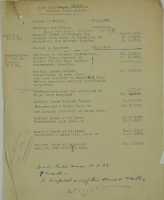 Report of the funeral of Dorothy Mary Watson and Mildred Owen.

Report of inquest into the deaths of Dorothy Mary Watson and Mildred Owen.

Mary’s photograph was collected by the Women’s Subcommittee of the Imperial War Museum as part of its collection of women who died during the War.

Notes: In September 1915 11 year old Margaret Watts held a bazaar at home, selling ‘all her toys and little ornaments’ over two days. She raised half a guinea (10/6d) towards the cost of the Llanelly Motor Ambulance

Notes: Gabrielle (Bobby) West was the youngest of five children of a clergyman. Initially she volunteered as a VAD cook, but could not afford to continue to work unpaid, so began paid work at a munitions canteen in London. When police women began to be recruited to work in munitions factories she and her friend Miss Buckpitt joined. After a brief posting to Queensferry NEF they were promoted to Pembrey in January 1917. Her account of her time at Pembrey paints a very full picture of what life was like for the workers there. See her account of Mary Morgan [qv] and her fits. In May 1917 she was transferred to the Royal Ordnance factory, Rotherwas Hereford. When she was 89 years old Bobby was recorded for the Imperial War Museum’s oral archives. 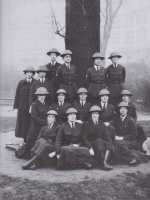 Gabrielle (Bobby) West in police uniform. She is back row, second from left.

Gabrielle’s drawing of the danger buildings at Pembrey. ‘.. where the most dangerous work is done, the sheds are actually inside the hills.'

Notes: Mary Ann was a store hand in the Women’s Forage Corps, which sourced and processed feed for the Army’s horses. Over one million horses and mules were used by the British Army during the War, mostly for haulage and transport. Mary Ann was 39 when she died; her next of kin was her father Thomas Whaley of Cardiff.

Mary Ann’s name on Nominal Roll of Officials and Member[s] who have died while serving in the W.F.C

Notes: Florence Wheeler applied to the Llanelly Police Court for the right to hold a licence for the Swan Inn, Llanelly. There was some doubt that a women could hold a licence, but she was successful. She had already managed the Greyhound, ‘the largest house in the town’. 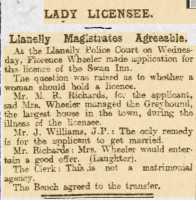 Report of Florence Wheeler’s successful application for a licence for the Swan public house, Llanelly.

Notes: Olive Wheeler was born in Brecon in 1885 and attended the County Girls School there. Obviously a prized old girl of the school, she gave a speech at the 21st anniversary celebrations of the headmistress, Miss Davies, in 1917. Olive was a student at University College, Aberystwyth gaining her BSc in 1907 and MSc in 1911, and serving as President of the Student Representative Council. She then left for Bedford College London where she gained her doctorate. She did not return to Wales until the early ‘20s. She succeeded Millicent MacKenzie [qv] as Labour Candidate for the Welsh Universities in the 1922 election, and became Professor of Education at Cardiff in 1925. In 1949 Olive was made a Dame for Services to education in Wales.

Photograph of Olive Wheeler, probably taken when she was an MSc student at Aberystwyth. 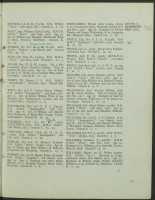