Notes: After serving in the Boer War, Mabel Tunley joined QAIMNS in 1903 as a staff nurse, rising to become Acting Principal Matron in France and Flanders during WWI. Among other awards, she received the Military Medal for 'exceptionally good work in assisting getting all the patients, 260, down to the cellars, so that when the Clearing Station was eventually hit not one of the patients received a scratch. Her cheeriness and courage were instrumental in keeping everyone who came in contact with her up to the mark. She was slightly wounded and remained at duty.' Bethune, 7th August 1916.

Notes: Margaret was appointed Demonstrator in the Chemistry department of Aberystwyth University early in the war. She worked on the preparation of diethylamine, an inhibitor used in pharmaceuticals. At the end of this contract she wrote to the War Committee of the Institute of Chemistry ‘I can put all my time and energy at your service for the next 6 weeks, and am anxious to know whether the few helpers down here could not be allowed to contribute further to the needs of the country? I should be much obliged if you could inform me whether there is any other preparations we can make, as I, for one, am willing and eager to give up all ideas of holidays whilst there remains so much to be done’. We do not know if this offer was taken up.

Notes: Eleanor was born in 1879, the daughter of a doctor. She became a noted botanist, and took over responsibility for the Department of Botany and the Herbarium at the National Museum of Wales in October 1914 when the Keeper joined his regiment. She also volunteered at the 3rd Western General Hospital, Cardiff. She became a VAD in 1918, dividing her time very strictly between the hospital and the museum. Eleanor Vachell died in 1948.

Notes: Hilda Vaughan, born 1892, was the daughter of a solicitor prominent in Brecknockshire and Radnorshire. Early in the war she joined the VAD as a cook at the Red Cross hospital in Builth but in 1917 left ‘to take up Land work with a salary’. During the time that she worked as a VAD, she took the lead in organising a free library for the town; it opened in November 1915. Hilda was already involved in encouraging women on to the land, and farmers to accept them. Her new position was organising secretary of the WLA in Breconshire and Radnorshire. After the war Hilda moved to London, married the novelist Charles Morgan, and began to write herself. Her work was much influenced by her experiences of meeting women of all backgrounds in the WLA. 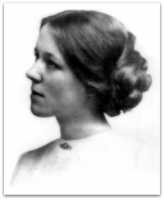 Hilda Vaughan as a young woman.

Record of service of Hilda Vaughan. 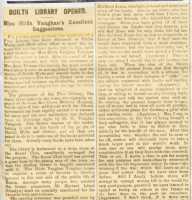 Report of open-air meeting in Rhayadyr, commenting on Miss Vaughan’s ‘pleasing and persuasive …manner’. Brecon and Radnor Express 31st May 1917

Dustjacket of Hilda Vaughan’s novel ‘The Soldier and the Gentlewoman’, 1932.

Place of birth: Glamorganshire ? or London ?

Notes: Jennie Vaughan was an assistant teacher at Garnant Council School; she was self-taught and had not been to training college. She may not have been a natural teacher. In 1915 she was punched by the mother of ‘the worst girl in the school’, a case that was reported at great length in the Amman Valley Chronicle and elsewhere. She also had a dispute with the school managers over her pay. Jennie was elected to the executive council of the Llanelly District Parliamentary Division Labour Party in April 1918, and made some speeches strongly in support of the Labour candidate in the 1918 general election. 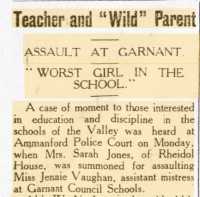 Beginning of a long report on Jennie Vaughan’s assault case, The whole reported in the Amman Valley Chronicle 23rd September 1915, p 3, is over 4000 words.

Notes: Ethel, a doctor’s daughter, joined the VAD in 1915. Her service included postings to the Hospital Ship Britannia and to Valletta Hospital, Malta, where she became seriously ill with dysentery, but recovered. Many did not. rn

Notes: Lizzie Veal was associated with Roath Road Wesleyan Methodist Church, Cardiff.The Roath Road Roamer, published monthly from November 1914, contained information about women war workers as well as men. Lizzie was one of ‘our Lady Roamers’, featured in April 1919. At that time she would have been one of over 1000 women employed by the GWR as porters and ticket collectors. Image and information courtesy of Glamorgan Archives (DWESA6).

Lizzie Veal was a Great Western Railway worker. She may have been a porter or a ticket clerk.

Notes: Lily Vinnicombe was a 29 year old widow. She died as a result of a self-administered abortion.

Notes: Marjorie Wagstaff was a volunteer from Newport who would go in to the Newport Section of the 3rd Western General Military Hospital twice a week to shave the patients. By the end of the war she had performed over 2,000 shaves. Her picture featured in the Daily Mirror as well as the South Wales Argus. 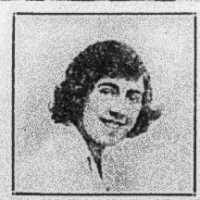 Marjorie Wagstaff, pictured in the South Wales Argus. Thanks to Peter Strong.

Notes: Gertrude was one of the two scholars of Bridgend County School to win a Glamorgan County scholarship to study at a Welsh university. (There were 7 County scholarships in all). Clearly a scientist from an early age (her other higher school certificate subjects were physics and chemistry), she graduated from Aberystwyth in 1919 with a ‘brilliant’ first class degree and joined the Botany department. 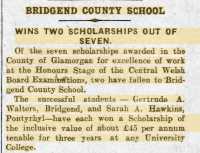