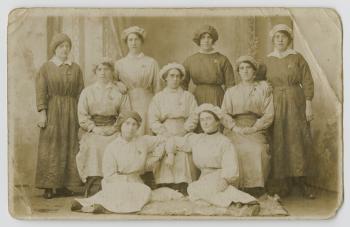 (1) Workers at the Vulcan Munitions Factory, Quarry Bank, Caernarfon. They all have triangular war-workers badges. There were many small factories like this all over Wales. (Mrs Nanno Hughes; ©: W.Williams, Photographer, Castle Square, Caernarfon By courtesy of the People’s Collection Wales)

March 1915 saw the beginnings of mass industrial employment for women. Many had lost jobs in manufacturing during 1914, with a great reduction of employment in ‘luxury trades’. But poor planning had left the army seriously short of artillery shells. The Ministry for Munitions was established to coordinate the manufacture of armaments, and as many men had joined the army, there was a great need for women workers to replace them in the nationalised factories. The suffragette leader, Mrs Pankhurst told Lloyd George that ‘there are very grave complaints being made that women now working for private munitions are being sweated’, being paid well below the rate offered to men. Lloyd George replied that all should be well in the newly nationalised factories. However women munitions workers, though comparatively well paid, never achieved parity with male workers. (1)

In March too the Board of Trade issued an appeal for women to register for work - any kind of paid work, ‘industrial, agricultural, clerical etc’, at their local Labour Exchange. Over 33,000 women throughout Britain signed up within a fortnight, and over 100,000 by September, but very few jobs resulted. There were objections from employers and from the unions, for example attempts to employ women in the West Wales woollen trade were not successful for over a year. Then in August came the implementation of the National Registration Act, a well organised attempt to register every person aged between 15 and 65, so that they could be directed to the army or to war work. Each person had to fill out a form giving details of their families, working history and skills. The work was carried out in each local authority with the assistance of volunteers. Many of these volunteers, like these from Builth Wells, (2) were women. In a month or so each person was issued with a registration card.

The importance of women teachers grew throughout Wales during the year. Up to this date, women had had to resign on marriage; now with the shortage caused by many male teachers joining the army, the regulation that ‘married women supported by their husbands’ could not work for the council was gradually suspended in most education authorities. Aberdare Education Committee resolved in June that ‘women teachers who married soldiers would be allowed to continue teaching for the duration of the war.’(3)In October Pembrokeshire Education Committee grudgingly agreed that married women could be appointed ‘in cases where no application had been received from unmarried teachers.’(4)
Many teachers like this young women (5), with her class of 8 and 9 year olds in Haverfordwest had great pressure put on them professionally as well as personally.
In early February 1915 Miss Jones of Resychae (Res-y-cae) was elected the first lady president of Flintshire County Teachers Association. As she said in her inaugural address (6)‘… the educational work of the country must be carried on for the sake of the child. They must try to brighten their small lives. Many of the fathers had joined the colours, and many alas, had “fallen by the way.” Nearly all the married teachers lost their jobs at the end of the war.

Schoolchildren could not avoid war work. In January pupils of Gladstone Road Girls School, Barry raised £7 14s 9d for various war charities by making ‘Young Patriots League’ badges, holding concerts and sales of work (7).They also knitted ferociously: ‘helmets, scarfs [sic], body belts, socks and bed socks’ for soldiers. ‘The boys contribute their pence so that the girls may knit more garments’. Their work was rewarded with certificates such as this (8) They were also employed in agriculture. In June Wrexham Education committee agreed to a request to bring forward the summer holidays, so that children could help pick strawberries (9). Women were being trained for farm work, though the Women’s Land Army would not be formed until 1917.
University education was affected too. Many male students left for military service before their exams, leaving classes at Aberystwyth University full of able women students. The English department noted only one man among the nine students taking English honours. (They were ‘well above the average in point of merit’). Miss Wretts Smith was ‘heartily congratulated on being the first woman-student in the University to be awarded the highest distinction in Economics and Political Science’. Women academics gained promotion more readily during the year. Miss Brebner became an acting professor of German, and Miss E A Lloyd obtained a lectureship at Bangor. Olivia Griffiths, who had graduated with a first class degree in 1910 (10), was a lecturer in Education at Aberystwyth (and later in Bangor). The University’s staff remained though mostly male (11).

Organising comforts for the troops continued to occupy many women in Wales. As well as sewing and knitting, parcels of tobacco, sweets and treats were sent all over the world. The Cambrian News of 22nd December records the thanks of members of one chapel in Aberystwyth who had received parcels in France, Salonika and on the high sea, and who included two nurses, Sister Evelyn M Evans of the Welsh Hospital, India, and Sister S C Kenrick of the Welsh Hospital Bombay. They had both received cake (12) Sister Evans wrote ‘it is so nice to think, though we are so far away, that we are not forgotten’, and Sister Kenrick invited Captain S James to tea to share hers!