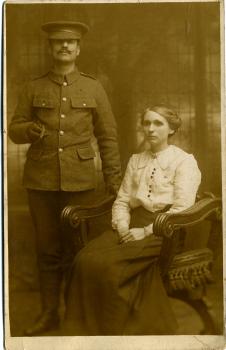 The outbreak of War on 4th August 1914 took most of the country by surprise. The previous day had been August Bank Holiday. An estimated 50,000 day-trippers visited Barry Island from Cardiff and the mining valleys, and north Wales resorts were similarly crowded. However within a week of the declaration of war many women had already become involved. Nurses who belonged to the QAIMNS Reserve or the Territorial Forces Nursing Reserve were called up. Florence Howard of Pontypridd may have been one of these. She died in November 1914, so must have been active early in the war. Hilda Downing of Newtown was another. Hilda was nursing in a children’s hospital in Kent that was converted into a military hospital on the outbreak of war, and died of influenza in 1918.

More typically, the middle- and upper-class women in Wales took to organising things. All over the country Red Cross groups were teaching and learning first aid (3,4) or making hospital supplies; for example, by early November, over 1500 garments had been despatched by the Mayoress’s Fund in Abergavenny (5). Miss Maud Starkie Bence (6), a friend of Lord and Lady Glanusk of Crickhowell, immediately took over the organisation of motor vehicles in Breconshire. On 17th August she was able to write to the editor of the Brecon County Times.’Sir, May I state through your paper a few statistics.... Breconshire has some 522 automobiles appearing on the licensing office books - 205 motor cars, 238 motor cycles, 79 trades conveyances of which Brecon Borough has the total of 107, the divisions of Brynmawr 28, Builth and Llanwrtyd 68, Crickhowell 83, Defynock 17, Hay 32, Merthyr and Pencelly 43, Penderyn 11, Talgarth 41, and Ystradgynlais 92. Roughly, already 150 automobiles are able to do service for the country and county.’ Later, though English, she took control of comforts for the South Wales Borderers, so effectively that when she died in 1916 the regiment placed a plaque in St Brynach’s church in her memory (7).

The fight for votes for women, that had occupied many of these women for much of the century, now took second place to war activities. Some women followed Emmeline Pankhurst into fervent jingoism, while others took advantage of new opportunities to work, either in voluntary organisations, new areas of paid employment, or in anti-war activities.
Those most affected by the war were those women whose husbands or sons were already in the army or navy, or who joined in an early fit of patriotism. One of these was Elizabeth Hopkins of Newport whose husband David volunteered for the army in November 1914, despite being 37 years old and the father of four small children. In the photograph taken to mark this he looks intensely proud, whereas Elizabeth looks deeply apprehensive (8) David Hopkins survived the war, but was badly injured at Gallipoli.