Notes: Olive Wheeler was born in Brecon in 1885 and attended the County Girls School there. Obviously a prized old girl of the school, she gave a speech at the 21st anniversary celebrations of the headmistress, Miss Davies, in 1917. Olive was a student at University College, Aberystwyth gaining her BSc in 1907 and MSc in 1911, and serving as President of the Student Representative Council. She then left for Bedford College London where she gained her doctorate. She did not return to Wales until the early ‘20s. She succeeded Millicent MacKenzie [qv] as Labour Candidate for the Welsh Universities in the 1922 election, and became Professor of Education at Cardiff in 1925. In 1949 Olive was made a Dame for Services to education in Wales.

Photograph of Olive Wheeler, probably taken when she was an MSc student at Aberystwyth.

Notes: Born in 1890, Sarah Rees had worked as a telegraphist in Swansea before joining the WAAC in 1917. She served in signals in France. While there she married her fiancé, Evan John Harry, who was serving in the Field Ambulance Corps. Before the war he was Headmaster of Ynystawe Council School. He walked into a café where she was with friends, and asked her to marry him on the spot. The wedding took place in a small church in Étaples. As a married women Sarah Harry then had to resign from the WAAC. Many thanks to Nia Richards. 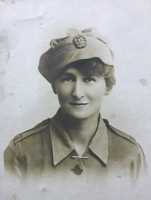 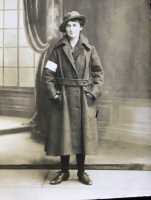 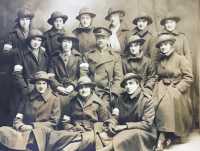 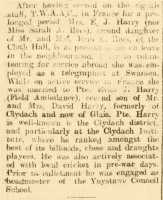 Notes: Minnie Jones was the sister of Bessie Jones [qv]. She was appointed Lady Superintendent of the Munitions factory at Penrhyndeudraeth, probably in 1916 when it reopened after an explosion and nationalisation. In September 1918 she showed Mrs Lloyd George around the works when she came to open the new Y W C A attached to the factory. When production ceased in December 1918, Minnie was presented with a silver bowl ‘by the Women Workers of H M Factory as a mark of esteem and appreciation of many kindnesses’. Minnie was the recipient of Bessie Jones’s letters from France. She later became a JP.

Notes: Cecelia and her husband Hubert Owens moved to the United States in 1909, together with their two sons Ronald and Reginald. She and the boys were returning to Wales on the Lusitania, together with her brother Alfred Smith, his wife Elizabeth and their children Helen [qv] and baby Hubert. Both sets of parents and children were separated after the explosion, and Cecelia and her niece Helen were the only survivors. Helen was rescued by a Canadian journalist, while Cecelia, who could swim, stayed afloat with the aid of a lifebelt and was rescued by a fishing boat after some hours in the water. She was recognised by Helen at the hotel in Queenstown, Ireland, where the survivors were taken. Cecelia returned to the United States with her husband, but they came back to Swansea during the 1930s. 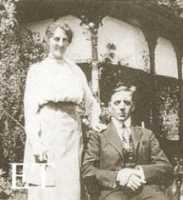 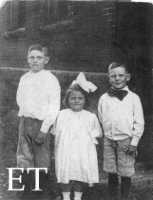 Part of a report of Cecelia Owens’s experiences on the Lusitania. Cambrian Daily Leader 11th May 1915.

Notes: For the first few years of her life Megan lived in the family’s Welsh-speaking home in Criccieth. When she was 4 her father Lloyd George became Chancellor of the Exchequer, and the family from then on split their time between 11 (later 10) Downing Street and North Wales. From an early age she appeared with her father at public events. In February 1919, when she was 17, she accompanied him to the Paris Peace Conference. Her presence created something of a stir, though she was in fact at school in Paris too. Later she wrote ‘I’ve had politics for breakfast, lunch, tea and dinner all my life.’ In 1928 she became Wales’s first woman Member of Parliament, for Anglesey.

Notes: Annie Handley was one of three Welsh nurses serving on the hospital ship Britannic (sister ship to the Titanic). The others were M A Harries and Nurse Edwards. All survived when the ship struck a mine in the Aegean sea on 21st November 1916 and sank, with the loss of 30 lives out of 1065 on board. She spent the remainder of the war nursing in France.

Report of the survival of Ann Hardley

Notes: Catherine, born 1896, was one of 10 children – 6 sisters and 3 brothers. At 15, in 1911, she was working at the Afon Goch Inn, Trelogan. In 1917 she joined the WLA, and seems to have been posted to the Machynlleth area. There she met and married Pte G V Grainger of the South Lancashire Regiment in 1918. Thanks to Sue Hickman. 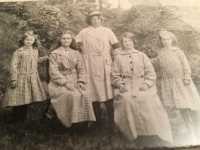 Photograph of Catherine Evans in WLA uniform with four of her sisters, left to right Harriet, Rebecca, Sarah and Miriam 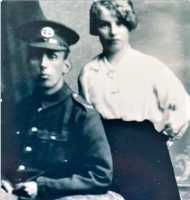 Photograph of Catherine and her future husband George Grainger.

Notes: Isabella was the only daughter of a Scottish family settled in Brecon. Her father A A Mitchell was an Alderman and JP, and both her brothers volunteered as army officers. In September 1915 she was working in the French Red Cross Canteen at Creil Station north of Paris. She is said to have received the Croix de Guerre in the summer of 1918 ‘for three years motor ambulance service with the French Army, and especially for good work at Creil’. Thanks to Marianne Last. 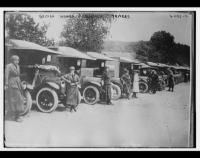 Notes: Emily was a trained nurse, probably trained at the Elizabeth Garrett Anderson Hospital in London. At the outbreak of war she may have nursed in France. She joined Mrs Stobart’s Unit of the Serbian Relief Fund, and nursed in the tented hospital at Kragujevac. Mrs Stobart’s Unit was caught up in the Serbian Retreat with the Serbian army and refugees. They fled over the mountains of Montenegro and Albania in the depths of winter to the coast where a boat took them to Brindisi in Italy. She was awarded the Serbian War Medal and the Order of Charity of Serbia. Later in the war she became a midwife, and during the 1930s seems to have trained as a doctor. Many thanks to Carol Coles.

Report of Emily Hill’s service and award of the Serbian medal of the Order of Charity. Flintshire Observer 21st October 1915.

Staff List for the Stobart Hospital in Kragujevac. Emily is listed under ‘Nursing Sisters’. Note Mabel Dearmer’s name [qv]. Thanks to Carol Coles.

Death: 1970, Cheltenham, Cause not known

Notes: Born 1891 to a German father and English mother, Kathleen Carpenter (she changed her surname from Zimmermann at the outbreak of WWI) was awarded her BSc in 1910. She remained at Aberystwyth for research, and subsequently became an Assistant Lecturer in the Zoology Department. She gained her PhD there in 1925. Her seminal studies focused on the environmental impact of metal pollution on Cardiganshire streams. This gained her international renown, particularly in the United States where she worked at several leading universities. Kathleen Carpenter is regarded as ‘the mother of freshwater ecology’.

Kathleen Carpenter in about 1910 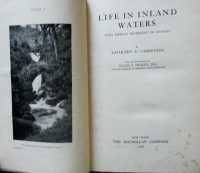