Notes: Nothing is known of Maggie Williams at present, apart from the press cutting below. 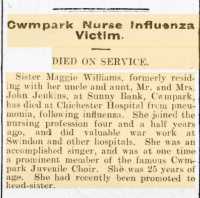 Notes: Nothing is currently known of Nurse Mary Jones, who died of complications of flu aged 24.

Notes: Margaret Meredith had been a farm servant at Grugwyllt Farm, Margam for ‘about a year’. She was 27 or 28. On the evening of February 23rd 1916 she ate yew leaves in an attempt to procure an abortion, and died of poisoning. She had a soldier lover, but had not seen him for a year. She was also said to be seeing a man from Cwmafon. A longer account of the inquest in the Brecon County Times shows that the coroner questioned her employer, Caradoc Jones, a widower, about her condition. He denied responsibility. The verdict was ‘death was due to poisoning by taking yew leaves while temporarily insane’. 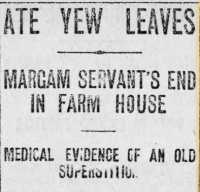 Headline to the report of the inquest of Margaret Jane Meredith. Cambria Daily Leader 25th February 1916.

First part of the report of the inquest into Margaret Meredith’s death. The full report can be found in the Cambria Daily Leader, 25th February 1916, p.6.

Notes: Mary, aged 33, had been working at Pembrey for about a year. On 16th December she was demonstrating a process, how to disassemble shells, to a fellow worker. Suddenly she collapsed, and died soon afterwards. According to her husband she had suffered from bad headaches for 12 months, though she was well when she left for work that morning.

Notes: Lily Vinnicombe was a 29 year old widow. She died as a result of a self-administered abortion.

Notes: Nothing is currently known of Florence Howard.

Notes: Worked at Newport Hospital. Eva’s photograph was collected by the Women’s Subcommittee of the Imperial War museum as part of its collection of women who died during the War. Two of Eva’s brothers were killed in France. Daughter of Mary Davies (WaW0172), 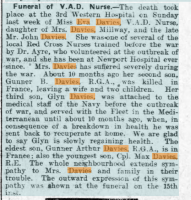 Eva’s photograph was collected by the Women’s Subcommittee of the Imperial War museum as part of its collection of women who died during the War.

Notes: Esther Davies, aged about 30, died after complications from a miscarriage. A Swansea midwife, Mary Lavinia Beynon [qv], was charged with her murder, the charge being that she had used an instrument to procure an abortion. Esther Davies, described as ‘a woman of prepossessing appearance’, seems to have lived a rackety life driving for the Munitions service whilst her husband was in the army. ‘Gentlemen friends’ and ‘visits to Birmingham’ with another woman, Nurse Poulson, were reported in the Swansea press. She had been fined 10s by Neath Magistrates Court in 1917 for failing to produce her driving licence; on that occasion Esther was described as ‘stylishly dressed’ and ‘still smiling’. Mrs Beynon, a Police Inspector’s wife, was found not guilty. 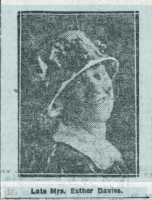 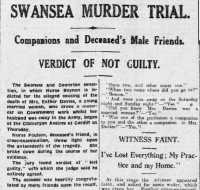 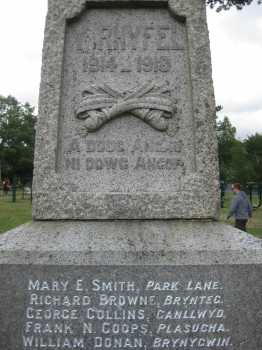 Notes: Jean, who was 18 when she died, was the eldest of six children of a widowed mother. In November 1919 her case was raised in Parliament by Haydn Jones, MP for Merioneth. Jean had been the chief support of the family, but her mother was not entitled to any form of compensation and was forced to ask for parochial relief. The matter was ‘considered’ by the Financial Secretary to the War Office, but we do not know the outcome. Jean Roberts’s name appears in the Welsh National Book of Remembrance.

Details of Jean Roberts in the War Graves Register

Jean Roberts’s name in the Welsh National Book of Remembrance.

Jean Roberts’s name on the War Memorial in St David’s Church, Blaenau Ffestiniog. It was obviously added after WW2, hence the mistake WAAF for QMAAC.rn. rn